In this tutorial we explain how to create, edit, and delete Adobe Captivate variables. One of the easiest tasks you’ll ever perform in Captivate is to create a new user variable. This is just as well, because if you intend to be creating complex interactivity in your e-learning, you’ll definitely be creating lots of variables!

Once you’ve created a number of user variables from time to time you’ll need to change something. Since you cannot change the variable’s name, your editing options are limited to altering the default value, description text, or removing/deleting the variable altogether.

As you develop a project you may find that some of the variables you create become redundant and need to be removed (perhaps because you had to create a duplicate variable with a different name). It’s a good idea to take out the trash by deleting these unwanted variables because they can waste browser memory and slow down run-time performance.

The process is simple enough…but there are some important issues to be aware of:

Just click the Variables dialog Usage button (similar to the one on the Advanced Actions dialog) to show where the currently selected variable is referenced on any slide in the project, as well as which specific run-time event is used to execute the action involved. 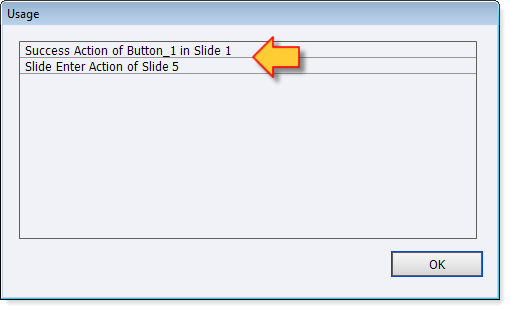 This now makes it extremely easy to do any required project file housekeeping. If your variable is not used anywhere, you’ll just see a dialog simply saying “Item is not currently in use” and you can safely delete it.

However, there appears to be one caveat. Variables that are referenced in widgets don’t get taken into account by the Usage dialog. So if you have a lot of widgets or interactions (which are also widgets) in your project, you may need to check them manually before starting any round of mass deletions.